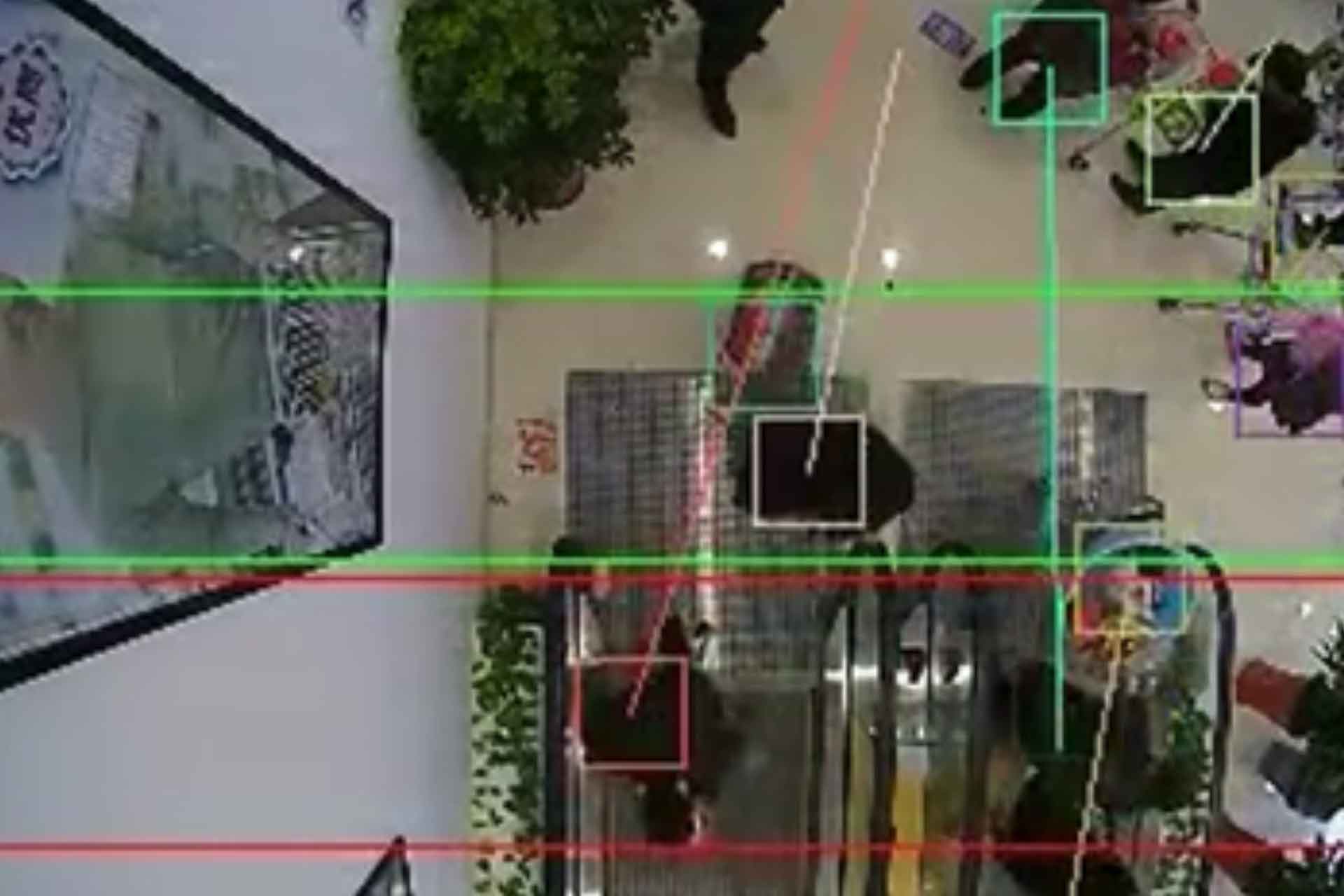 How Does TD Intelligent Sensor Work?

TD series of intelligent sensors capture and analyze images for recognizing footfall traffics. By detecting the changed pixels in the images, the sensor identifies a specific object by checking if the object has “head and shoulder” components which, together with other attributes, will be used for defining the object as a person. The ‘person’ will be squared as shown in the illustration and be tracked and counted. The image processing speed of TD 2D sensor is 20 frames per second, which is more powerful than most of other 2D sensors in the market. Under normal situations, TD 2D sensor usually achieves 95% accuracy rate.
3D stereo vision works similarly as human eyes. It identifies image pixels of a specific point in a scene by using two lens, and then obtain 3D information including depth and other attributes by triangulation using a ray from each camera. The more corresponding pixels identified, the more 3D points that can be determined with a single set of images. Correlation stereo methods attempt to obtain correspondences for every pixel in the stereo image, resulting in tens of thousands of 3D values generated with every stereo image. As 3D stereo vision analyzes more attributes such as depth information, the accuracy can be significantly improved. Objects without depth such as shade and reflections are easily detected, which may be regarded as a person by the sensor based on 2D information.

“DeepCount” Based on Deep Learning

TD intelligent sensors further upgrade the accuracy level of image recognition through TD patented “DeepCount” which is an innovation based on deep learning.

How Does Deep Learning Work?

It is diﬃcult for a computer to understand the meaning of raw sensory input data such as an image represented as a collection of pixel values. Deep learning resolves this diﬃculty by breaking the desired complicated mapping into a series of nested simple mappings, each described by a diﬀerent layer of the model. The input is presented at the visible layer, so named because it contains the variables that we are able to observe. Then a series of hidden layers extracts increasingly abstract features from the image. These layers are called “hidden” because their values are not given in the data; instead the model must determine which concepts are useful for explaining the relationships in the observed data. The images here are visualizations of the kind of feature represented by each hidden unit. Given the pixels, the ﬁrst layer can easily identify edges, by comparing the brightness of neighboring pixels. Given the ﬁrst hidden layer’s description of the edges, the second hidden layer can easily search for corners and extended contours, which are recognizable as collections of edges. Given the second hidden layer’s description of the image in terms of corners and contours, the third hidden layer can detect entire parts of speciﬁc objects, by ﬁnding speciﬁc collections of contours and corners. Finally, this description of the image in terms of the object parts it contains can be used to recognize the objects present in the image.

The accuracy of image recognition based on deep learning relies on a large amount of annotated sample data through high speed computing (usually cloud computing) to form reliable recognition model or exact algorithm. The actual scenarios in people counting applications would be even more complicated. Therefore the hardware platform must be equipped with strong processing capability for computing. Furthermore, the precision of the exact algorithm built upon the training sample data from a certain scene may degrade if the algorithm is applied in another scene or scenario. 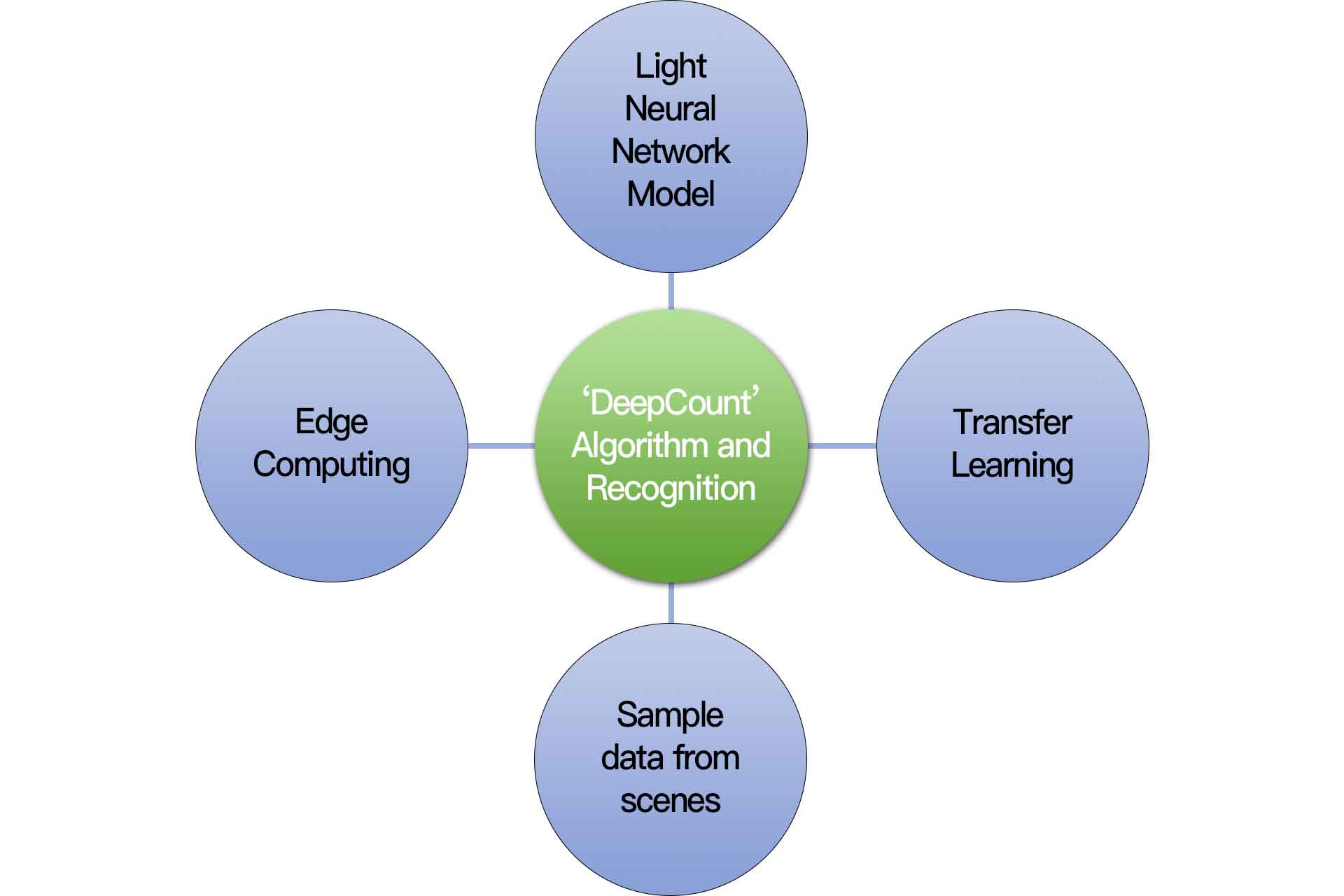 Edge computing implements edge intelligence on the edge of the network which is very close to the end user or data source. It is based on this feature that edge computing can achieve high-frequency data exchange and real-time transmission without the need to upload data to the cloud for computing.

The performance of deep learning appears to be unsatisfactory when there is a big difference between the training sample scenario and the application scenario. Transfer learning aims to migrate trained model parameters to a new model to aid in new model training considering most of the data or tasks in people counting are relevant, and therefore the new model can be quickly built up with optimized learning efficiency.